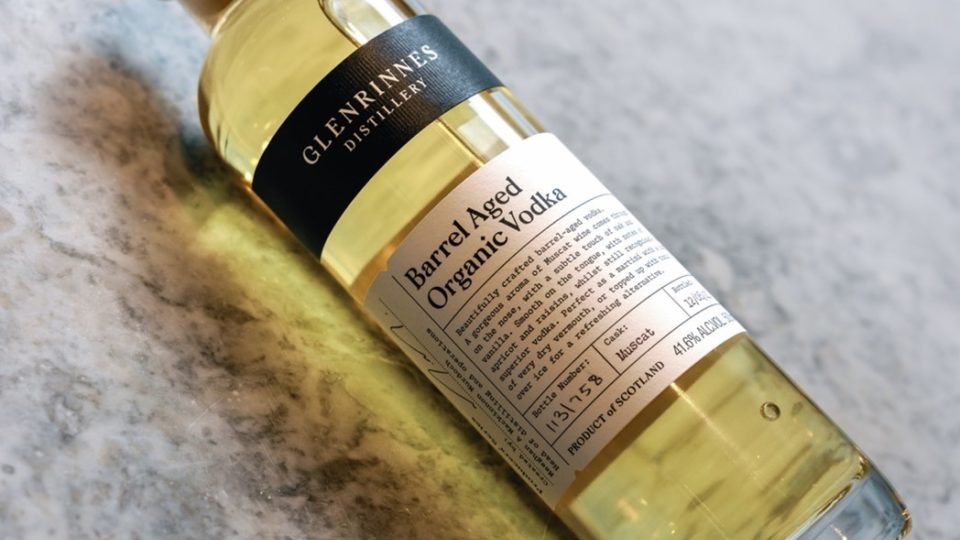 Glenrinnes Distillery, the maker of internationally acclaimed Eight Lands Gin and Vodka, has released its latest creation: a limited-edition Muscat barrel-aged vodka, developed by their Head of Distilling and Operations, Meeghan Murdoch. This is the second release from their Producers’ Series which allows any of the team to put forward an idea for consideration as a limited edition product.

This has been masterfully created by taking their award-winning organic Eight Lands Organic Vodka at 59% and cask-ageing it for two months. The virgin casks were first filled with brandy, followed by Muscat that was aged for 31 years, and finally the Eight Lands vodka. The end result is a beautiful barrel-aged vodka. On the nose you can expect a gorgeous aroma of Muscat wine with subtle touches of oak and vanilla. On the palate it is delightfully smooth with notes of apricot and raisins, while still being recognisable as a high-quality vodka.

The barrel-aged vodka works perfectly as a martini made with a hint of a very dry vermouth or topped with tonic water over ice for a refreshing alternative.

“I have long been interested in the impact that different barrels can have on spirits, all the way back to my time as a winemaker, and it’s fascinating to see what whisky makers are using now to finish their products,” commented Meeghan. “Our vodka is such a fantastic spirit; I knew it would make the perfect starting point for something new and exciting. I hadn’t ever seen a vodka aged in a Muscat barrel and quickly knew we were onto a winner once the vodka had spent a short time in the barrel."

Founder of Glenrinnes Distillery, Alex Christou remarked, “We are really excited about this release - whether or not it is the world’s first Muscat barrel-aged vodka - it really is something special. It’s delicious, and feedback from both trade and consumers has been fantastic so far. Based on the fact that our Sloe Gin release sold out in a matter of days, we are expecting demand to be high for this.”

The eye-catching Glenrinnes Distillery can be found in the heart of Speyside, Scotland at the foot of the Ben Rinnes mountain. The purpose-built distillery and visitor centre was established by the father and stepson team of Alasdair Locke and Alex Christou, who moved to the area more than 25 years ago. The distillery started producing spirits in early 2019, launching its own Eight Lands brand later that year. Since then, Eight Lands has won a number of prestigious awards and is available the UK, Canada, Macao, and Japan.

The Muscat barrel-aged vodka is bottled at 41.6% ABV, and retails for £37 for 50cl. The release is limited to 758 hand-numbered bottles and is available from Harvey Nichols, The Whisky Exchange, alongside a selected collection of independent retailers, cocktail bars and direct from www.eight-lands.com.