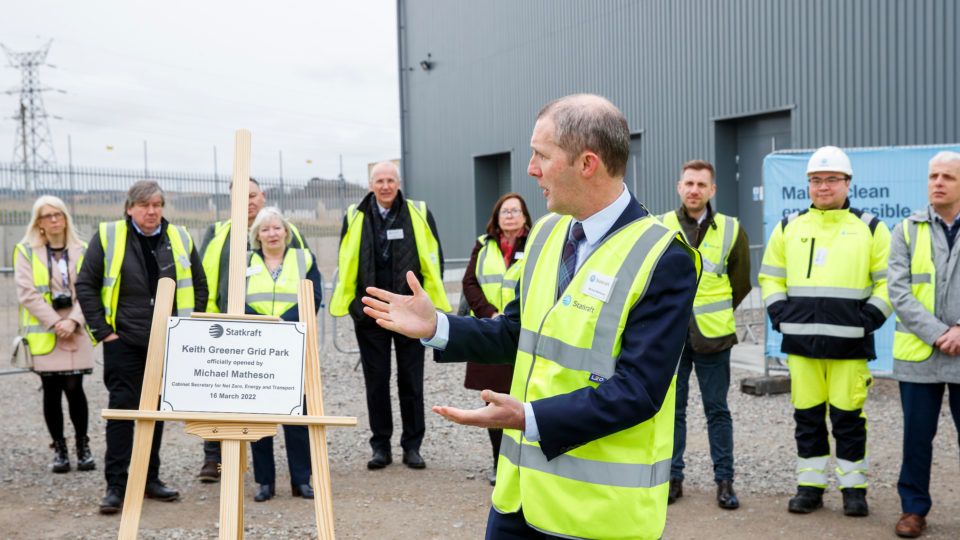 The cabinet secretary for Net Zero, Energy and Transport joined industry leaders and the community in Moray as he unveiled a world-leading grid technology project.

Cabinet secretary for Net Zero, Energy and Transport, Michael Matheson has unveiled a project which will help increase the amount of renewable energy delivered via the national grid network, and reduce costs for the consumer.

The Keith Greener Grid Park, the first of several which will be built across the UK, is a project pioneered by Statkraft, Europe’s largest generator of renewable energy, in association with the National Grid Electricity System Operator (NGESO).

Its cutting-edge technology will be instrumental in helping shape a responsible energy future by reducing reliance on fossil fuels and helping deliver the NGESO’s target of being able to operate a zero-carbon electricity system by 2025.

Addressing the need for grid stability, the innovative project uses two rotating stabilisers, manufactured by GE Power Conversion, to increase the amount of renewable energy that can utilised on the grid.

This will not only help reduce the nation’s dependence on expensive fossil fuels, but will also help reduce costs to consumers.

Statkraft’s £25 million project, mimics the spinning turbines of a traditional power station, which have helped to balance the grid’s frequency at about 50 hertz for decades.

Commenting on the huge step forward in running a zero-carbon electricity grid, Mr Matheson said: “News of rising energy prices earlier this year were extremely worrying for many people, with the risk of fuel poverty a real risk for a huge number of homes across the UK.

“The energy market has faced a huge challenge due to the unprecedented increase in global gas prices, and the government has been very interested in hearing about projects and developments that not only support the energy transition but support cheaper power.”

Speaking at the launch event which was also attended by industry leaders, suppliers and members of the local community, Mr Matheson continued: “One of the biggest instruments in decreasing the effects of the energy price hikes is to add more domestic and renewable resources to the power supply system. The Keith Greener Grid Park is a prime example of ways this can be done – and it was encouraging today to hear more from the technical team behind the trailblazing project.”

A £44million deal between Statkraft and NGESO will see a similar site become operational in Liverpool, and Statkraft say they plan for four further projects to be consented and under construction, with a large number of developments in the pipeline.

The sooner this is implemented, the sooner the NGESO target of being able to operate a zero-carbon electricity system by 2025, will be met and the closer the UK will be to reaching its net zero emissions targets.

Guy Nicholson, Head of Grid Integration at Statkraft UK said: “The Keith Greener Grid Park is one of several projects that Statkraft is championing across the UK.

“Having worked across the country for more than 15 years, we are committed to supporting the UK’s ambition for green energy and net zero targets. We are offering cheaper and greener solutions, reducing emissions and saving money for electricity consumers.

“The Keith Greener Grid Park is a huge step forward in helping the ESO to operate Great Britain’s electricity system carbon-free by 2025.

”Our grid network needs to adapt to accommodate the rapid increase in renewable energy generation – Statkraft is providing solutions to do just that.”

Benefits from the various projects go far beyond the production of renewable energy. A big part of the Statkraft story is its commitment to working at a local level and being a good neighbour, establishing community liaison groups, providing opportunities for local investment and generating significant economic and community benefits.

Mr Matheson added: “As part of my visit, I was pleased to hear from local businesses who have benefited from the work Statkraft is doing in Keith.

“This exciting project and the significant investment in the local economy will bring benefits for local supply chains while also helping put the region at the forefront of our continuing journey to put renewable energy at the centre of our journey to net zero.”

The Keith Greener Grid Park is one of three Statkraft projects being progressed in the area. The Scottish Government has recently approved an extension to the Berry Burn Wind Farm. Operational since 2014, Berry Burn’s 29 turbines power the equivalent of 48,000 homes with renewable energy. The addition of nine modern wind turbines installed would power the equivalent of 35,500 additional homes.

Statkraft are also delivering Lister Drive in Liverpool, as part of that agreement.